What do YOU fear?

In the last Mail Sack, Bungie challenged its fans to envision their greatest fear and fill a Destiny game space with it. The finalists are now up for your perusal - look 'em over, and vote for your favorite! (The winning entry will earn its creator a free shirt... so pick wisely!)
TAGS: bungie, art, contest
Claude Errera | Jul 23, 2013 08:06 pm | link 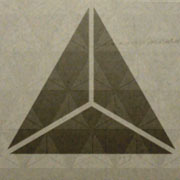 The Bungie.net Community Focus this week shines on The Black Garden, a B.net group devoted to writing. Go read the interview with its leader, Colonel Aloki - and help pick a winner in its fiction contest! (Bungie's supplying a pretty nice prize!)

The Mail Sack is now open for questions over on Bungie.net! Apparently tomorrow is Bungie's internal Bungie Day celebration, so perhaps some queries about the festivities are in order. If you have them, now's the time to ask any questions you might have about life on the other side of Jerome's desk!
TAGS: bungie, day, mail, sack
Beorn | Jul 15, 2013 06:02 pm | link

It's Bungie Week in the Starside Lounge 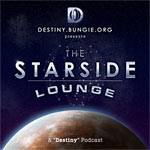 Grab your favorite pair of ears and subject them to Episode Two of The Starside Lounge. Four members of the DBO admin team set aside their differences to discuss every Bungie fan's most coveted game: Wreckateer. Somewhere between tales of giant slingshots and crumbling castles, the group manages to sneak in a few Destiny-related thoughts about our Chris Butcher interview, Bungie Week, Jason Jones, fan creativity, and of course: SPACE MAGIC!

(In addition to streaming or downloading from our Starside Lounge page, you can also listen on YouTube and subscribe through iTunes!)

They've been spelling it out all along...

Looking back, the connection should have been obvious - but it took Ragashingo to put it together for us. Swing by his forum post to connect the dots between Bungie's Alpha Lupi mini-ARG (which concluded on the day Destiny was revealed) and the upcoming Music of the Spheres symphonic release. Very, very cool stuff!
TAGS: bungie, teases
Claude Errera | Jul 13, 2013 04:33 pm | link

Visiting the most cheerful challenge finalists

After sifting through the multitude of entries in each image-based Bungie Day challenge, DeeJ has prepared a colorful gallery of finalists for your viewing pleasure. The winners are still being picked by Team Bungie, but in the meantime you can go see what made the first cut!

Bungie Day is here, heralding the midpoint of Bungie Week, and with it comes a handful of short-fuse contests on the Bungie.net forum. Time is short - the deadline for submissions is TODAY. (Presumably midnight Pacific time, though you might be able to squeak by with an overnight entry.) Submissions will be judged by DeeJ's fellow employees, and each winner will receive a Destiny poster signed by Team Bungie. There are seven contests to enter, so visit the threads below for details on how to craft something legendary for each one:

If you were hoping for more on Bungie Day Actual, keep in mind that this year the festivities have been stretched to fill an entire Bungie Week:

Comforting words from Bungie.net! (Thanks, MrPadraig08.)

Wake Up Your Ears

The 5th day of Bungie Week brings us musical tidings from the Bungie Maestros! This new piece, Awakening, was featured at the rotunda theater at the E3 expo a few weeks ago, but now it's available for everyone to enjoy as part of this year's extended Bungie Day celebration. Be sure to give it a listen and then sound off in our forums!
TAGS: bungie, week, e3, ronut, music
Beorn | Jul 6, 2013 06:15 pm | link

Sweet swag on sale in the store 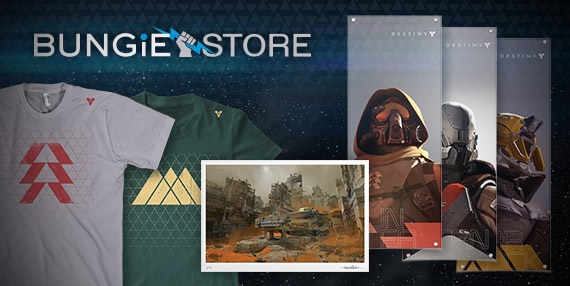 The Bungie Week festivities are spreading to the Bungie Store with a second salvo of E3 shirts in stock and available for purchase tomorrow. The stylish tees are joined by a trio of Guardian banners and a limited edition lithograph of "The Buried City". (That last item is NOT part of a private loot stream - there are only 150 of them available, but each is signed by the artist, Dorje Bellbrook, and all sales benefit the Child's Play Charity!) If you're looking to save a few credits at the Bungie Store, everything will be on sale for 20% off from July 6th to July 14th!

The first slivers of Bungie-blessed loot have begun to drop in honor or Bungie Day - err, week. Follow DeeJ's lovingly-crafted prose on a splendid scavenger hunt befitting any new Guardian. What can you unearth from the City's oldest denizens? Time will tell...

Wake me in seven days

Today might have been light on Destiny news, but fear not, for Bungie Day is only a week away. What wonders await us on the seventh day of the seventh month? If you care to speculate, kidtsunami has a fun thread for you, or we can all just pass the time by staring at this awesome new sketch Levi made of "that guy from the trailer". (Click for full-size.)

We sat down with Chris Butcher during the madness of E3 and asked a bunch of questions that were burning holes in our pockets (and our brains). He answered a lot of them. (Forgive us for the camera focus; our second unit had issues.) Go check it out - and then swing by our forum... if you have further questions, you might just find answers!

The Art of Ryan DeMita

Bungie artist Ryan DeMita scored a spotlight at Kotaku today - swing by to see some awesome Destiny art (along with Reach art). There are also links to his personal site and his CGHub page, if you want to continue to explore. Nice! Thanks, INSANEdrive.

Sometimes, they make your heart swell.

Bungie's not just a company that makes killer games - they also take care of gamers in ways that simply brighten my day. Swing by Bungie.net today to read about how Bungie is easing the pain at Seattle Children's Teen Center. It's not Destiny-related... but it's one of the many reasons I love these guys.

Looks like we spoke a touch too soon, as Bungie also put up "That's a Wrap", capping off their E3 recap series. Go enjoy! I know the DBO community is especially thankful for all the magic that Bungie provided the world over this past week. Can't thank them enough, and couldn't be more excited to await our Destinies...

So a Warlock and a Titan Walk Into a Bar...

Bungie has put up their E3 Day 3 recap video. Go and check out SPACE MAGIC!

When you fish upon the stars

It was the sack before E3, and all through the house

DeeJ wanted to let us all in on a mission ever-so delicate. Join him on a magical journey through time and space, a journey that will come to a slingshotting head this Monday at E3. The end - nay, the beginning, is extremely nigh.

IGN contacted a bunch of game developers to ask them what they thought about the Xbox One. Eric 'Urk' Osborne responded from Bungie - and oddly enough, his response references Sony more prominently than Microsoft. I guess you can interpret this to mean that Bungie views the next generation as the next generation (rather than as individual consoles)... or maybe it's just that MS hasn't really involved Bungie in its rollout of the new platform. It'll be interesting to see how front-and-center Destiny is in the upcoming Xbox One promotional PR. If you have input on this, Mr Daax (who initially brought this article to our attention) kicked off a thread on our forum - chime in!