Caesar? I never even met 'er.

Full credit to Stuntmutt for the headline; I couldn't NOT use it.

Stuntmutt has some issues with Destiny's RNG rewards. I suppose he has a point.

Stuntmutt's got a point... Variks has gotten somewhat more... enthusiastic this time around. 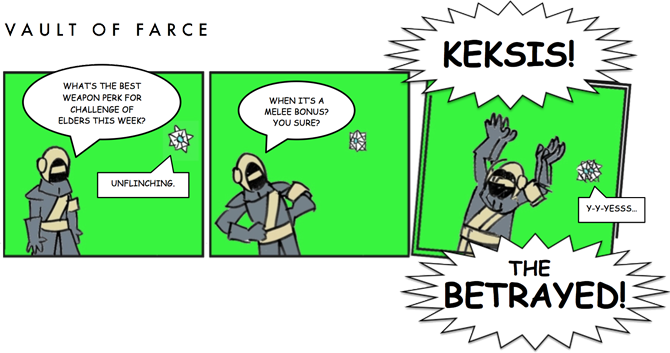 Stuntmutt realized after creating this strip that there's no green Chroma. Sometimes you have to bend reality for the sake of a joke. (This probably wasn't one of those times, but we don't pay him enough to force him to fix it.)

Stuntmutt let us know he's a little nervous about the tweaking incoming next week.

On Time, Most of the Time

Wow. I posted this earlier this morning - I guess the site's joke on me was to not actually save it. Almost made the headline even more true than it is! Stuntmutt sent the image below, along with the following note:

All we have to do is get through the next 24 hours without Bungie posting - 330 Year 1 weapons? APRIL FOOOOOOOOL... 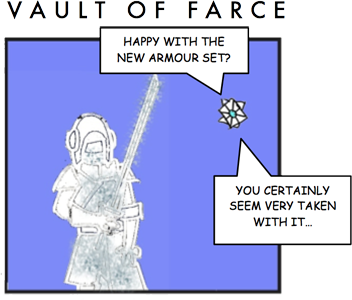 Stuntmutt sent along a Tuesday Vault of Farce; he suggested its tardiness (it arrived this morning) might be due to an overabundance of chocolate last weekend. Either way, it's totally appropriate for this week's King's Fall Challenge Mode... and I can't even tell you how many times I've lived through it. 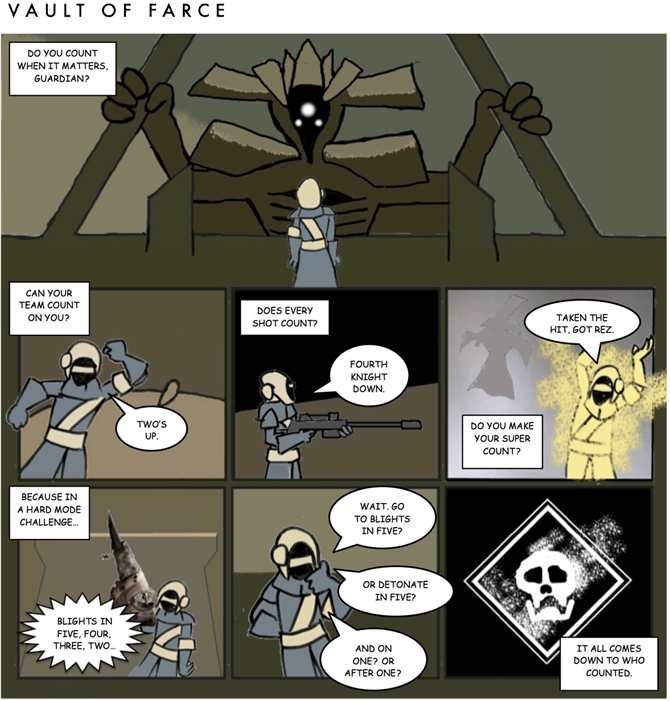 Stuntmutt is curious about that screenshot in yesterday's TWAB...

Are you having any timing troubles in Iron Banner? Stuntmutt feels you.

As Stuntmutt points out, a vaunted new feature in Crimson Doubles is already present in Raids, Iron Banner, and Trials...

Stuntmutt looked at the recent matchmaking changes in this week's Vault of Farce:

Putting the Pickup in Pick Up Group

Looks like Stuntmutt is gearing up for some sweet talk.

There are two offerings from Stuntmutt this week; the first was created on Tuesday, the second today. (If you need a little context, this Tweet from Tuesday and this one from today might help.) 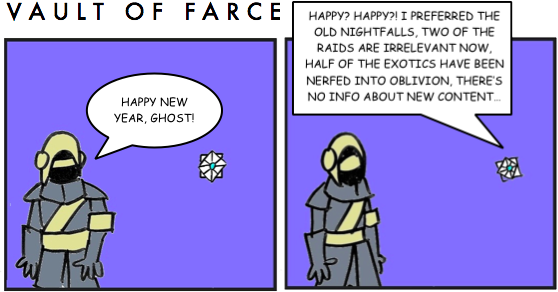 And to all, a Good Nightfall

Stuntmutt posted this on our forum yesterday:

Stuntmutt is in a holiday mood, and if we don't get another chance to say it, DBO hopes you have a great holiday season!

"Who knew they had their own skill trees?"

Here's the usual from me, an old joke wrapped in Destiny clothing.

If you want actual humour, I'd direct you to the reddit poster who pointed out -
Bungie promised us 320 helmets from SLR.
Sure enough, I've had 200 drop so far, only another 120 to go...

Stuntmutt felt like it was Christmas after he finished the Warpriest Challenge. (I felt the same.)