Back to the forum index

Today is the last day for Overwatch 1. Even though I haven't touched it since 2021, I still must admit some mild melancholy to such. This game is what got me through Destiny 2s low points. There was No sorting though endless "loot", No need to catalog what "forms of play" you keep or let go, and No grinding through repetitive slogs to even develop such things. No light levels saying "you can't play this yet". And, if you played with the intent I had, no need to LFG. Between 2016-2021, if things were just shit, I could just boot up Overwatch and, OH HEY! Get this-just, PLAY! I could just jump on, and play.

Some folks go to the bar after a long day. Some, with the means to do so, may go after a hobby, gardening or woodworking. Something that tends the mind off the day, and instead puts it to be exclusively upon the task at hand. Overwatch, for those years, was that for me.

Originally, I did nothing but quick play. I even did some competitive! Got up to Platinum and guided my main with a gold weapon. Problem was... I main Symmetra. And FUCKING FUCK, there are no seas as salty as my xbox inbox was. Stupid. STUPID!

Which sucks, because I KICKED ASS! Not here, but somewhere I have a clip of me in competitive destroying the ENTIRE team. One little Symmetra Vs a Team of 6. Of Tanks, Healers, DPS... and I win. And when I wasn't doing my teams work for them, I still was, because I'm a Symmetra Main BITCH! I don't think I will ever comprehend these fuck'n smooth-brains and their angst, their inability to comprehend how STUPID POWERFUL the portal is - IN EVERY iteration. Both when it was a Super, and when it became main kit. ESPECIALLY when the mode is goes all "King of the Hill" and we're the Defending team! IDIOTS!

Over time, I was just more and more done with it. And around 2018-ish, I said enough, and played exclusively in the "arcade mode". The amount of salt dropped dramatically (though still a few here and there), and I never looked back. Only real downside was I couldn't get character achievements in arcade mode, which is a shame, but.... Oh did I have fun.

SO MUCH FUN! Just, play.

While I could explain, I'll let the clips to the talking. Of the over 180 clips I made, here are a mildly random 20 of them. The rest are here should you want to view them.

What could possibly go wrong! I LOVE this Moment.

...and everyone learned a valuable lesson. :D

Watch me Troll about with Tracer... and Karma's reply. I laughed for a solid few after I did this. Aw man, I suck. :P

Playing "Random Heros" in the Arcade. I get Widowmaker, one of my very worst characters to play as. That said, part of the fun (for me) is testing my best with each characters as the game progresses. So I try, regardless the character, I mean that's part of the game. I'm just... doin' my thing.

SO when I get this here 3 kills in half-or-so a minute, I'm freek'n ECSTATIC! I jump to the side quick so I can clip it. That should have been the end of it. Just another sweet clip, but no, gotta add some SALT to this steak! :D

So, the first person in the triple-ish I have in this clip, "mmrwrightj" messages me oh... three minutes or so after I clipped this (the game is still going on, bro be rage post'n in the arcade) sends me a message "Reported - Enjoy your ban!". I exhale air out of my nose, and let out... THE Heartiest... of chuckles. I just got the greatest complement in all of gaming. I "Blinking White Guy meme". Surreal. Just surreal.

I message 'm that the observation is mistaken (and that's in ill-advised form to tell a person you reported them), but I am only rebuffed with "um no mistake just enjoy your ban and close your mouth".

To quote the puffball hallucination from Episode XCV of Samurai Jack - "What did you expect? A hug and a kiss?"

The more I think about it (being so surreal to me), the more I laugh. I laugh. Of all the places I get reported it's apparently in ARCADE where I get some tryhard-noob implies some sort of hackery. It's just too freek'n funny. Some of these kids on Overwatch man. Gotta learn that chill.

That's what I said when... THIS happened. And I mean... can ya blame me? Mad Props to AgentOrange514 who through a mix of luck and skill (or maybe just luck) pulled this off.

(I sent this person a message on xbox of my first clip above this one. They thanked me.)
--

Playing a game of random characters in arcade. Other team had a Orisa & Bastion combo that was just murdering my whole team. We had to break it, and I found myself suddenly with a plan. Special shout out to the Mercy in the group who had the good sense to figure out what I was about to do and turned my plan up to 11. All I wanted to do was get rid of the Bastion, but with her help, I was able to do more than that. This moment was also POTG, and I received many "Shot Caller" accolades at the end of this game. Unfortunately, I didn't capture that, as after I clipped it I for some reason a moment after shut down the Overwatch Client, and my Xbox wasn't able to grab from the cache that fast. Woops! I ended this game in disbelief... "holy crap did I really just pull that off?!"
Yes. Yes I did.

I knew EXACTLY what I was doing, and it was totally worth it! ;D LOL. 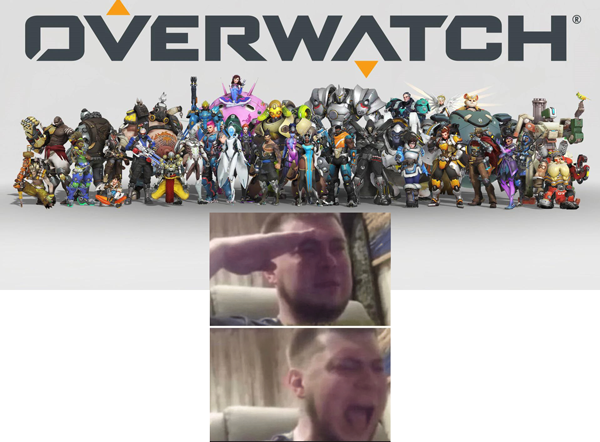