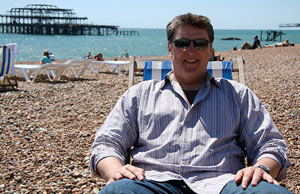 Marty O'Donnell is starting a new phase of his life - for the first time in almost 18 years, he is not working for Bungie. On April 15, he tweeted that Bungie's board of directors had terminated him without cause four days earlier. ("Without cause" means, legally, that Bungie does not have to justify the firing with proof of incompetence or malicious intent. Washington is an at-will employment state, and there are no penalties for employers who choose to terminate employees without an explanation.)

In a conversation with him this morning, he relied heavily on the phrase "I am no longer Bungie's Audio Director, and I cannot comment on their business." He couldn't answer questions like "is your music still going to appear in Destiny?" (though Pete Parsons, Bungie's COO, answered that question for Eurogamer - apparently, yes, it is) or "is there a chance that you could go back to work there?". He couldn't say what will happen to 'Music of the Spheres', a project he worked on with Mike Salvatori and Paul McCartney - it's a standalone, self-contained, finished 'musical prequel to Destiny' that was created last year, and that fans have heard bits of in the intervening months. He couldn't talk about what this all might mean for Destiny's release schedule, or the hole he left in the audio team (though he was pretty sure nobody else from that team, or any other, was fired at the same time). What he COULD say was that he's looking ahead, weighing options, and hoping for the best for everyone. ("There are still a bazillion people at Bungie I care about - I've worked there for almost two decades, and made deep friendships that will last forever. I wish for the best for the team, and for Destiny.") It's worth noting that the entire audio team currently at Bungie was hired by Marty.

He's got fantastic memories of his time at Bungie. He's one of very, very few people (maybe as few as 2) that have had a significant impact on every title they've released since Marathon Infinity, back in 1996. He holds his relationships with Nile Rodgers and Paul McCartney, both started through his work at Bungie, very dearly. He's always been willing to take a few minutes for fans with questions. It was clear throughout this discussion that his passion for what he was doing is not diminished.

He's trying to figure out what's next. He's gone live with a new website, just to let people know "I'm here!" He's currently taking some time to breathe, but he's open to new opportunities. (I asked him if he'd consider moving from video games to film - he said it's certainly an option. "I've never done a feature film, but I've worked on film scores, I've done commercials, I've done video games... if Spielberg called, I wouldn't say no.") He is grateful for the support of his family - his wife, his kids - and the fans who've poured their hearts out online in the past couple of days.

The day might come when either or both parties decide they can talk about what happened last week - but for now, we (the fans) need to be content with the following facts: Marty says he wants the best for the company (he's still an owner - he's just not the Audio Director any more), and Bungie says they'll still be able to meet deadlines despite this change.