14 May 2020
Link to this Update
Original B.net Link
Return to main page

This week at Bungie, a new quest was discovered.

Guardian Games has come to a close. Hunters won the first day, but Titans showed up in force to completely dominate the rest of the event. Warlocks took home the silver, and Hunters still look frabjous.

The final Iron Banner of the Season is also live this week and, along with it, players have discovered a new quest. The community has been tasked with helping Rasputin by completing Seraph Tower events and are currently working to complete the objectives on EDZ, the Moon, and Io.

We've seen feedback that the Tower events are too difficult and that it's hard to wrangle up enough people to join the cause. We have made some server-side changes to lower the difficulty of the event to help alleviate frustrations and increase your success rate.

We made an error when we calculated how many completions were required, so yesterday we introduced bonus multipliers to help the community's progress and get you all on your way to the next step. You can read more details on the changes we made here.

Back in February, Luke spoke about upcoming plans for Legendary gear infusion. The Destiny Dev Team has more details on how this system is going to work.

Destiny Dev Team: Today we're going to talk about changes to the Infusion system that are coming to Destiny 2. These changes are going to be visible starting in Season 11 but won't start impacting your arsenal until Season 12. More on that in a bit.

We want the sandbox to feel interesting, exciting, and dynamic, and to evolve in compelling ways over time in the same way that the game evolves. Our weapons are the primary way that players interact with the world, and Season over Season we want players to discover new weapons that feel powerful, have interesting new perks to explore, and power the builds that players craft in new and unexpected ways.

The changes to the Infusion system we're talking about today are designed to promote the following:

With those goals stated, let's break down how the changes will work: 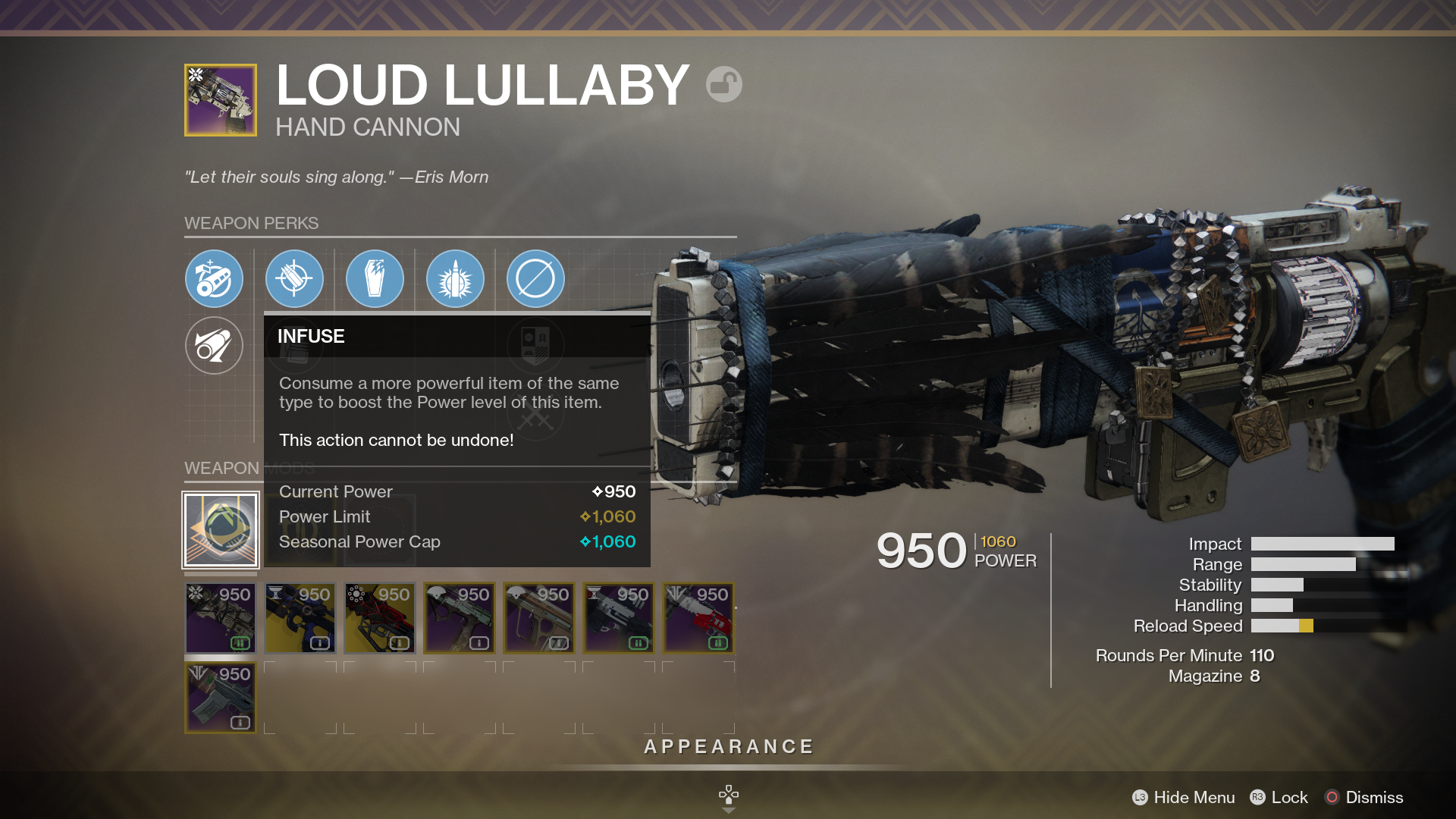 Those are the basics. But you may have additional questions, such as:


We're sure you'll have more questions that aren't covered above, so please let us know!

We're committed to Destiny 2 continuing to grow and evolve for years to come, and a part of that continued evolution is the curation of an interesting, exciting, and dynamic player sandbox. The introduction of Max Power Level will allow us to create exciting new gear more frequently without significant concerns of permanent power creep, which is unsustainable in any game. This also should open up creative and experimental builds, season over season, while letting you anticipate and prepare for how the sandbox will change over time.

Please continue to share your thoughts and feelings about these changes as you get your hands on them.

We spoke a lot about rewards last week, but still have some more juicy nuggets to share with you on some additional plans we have for next Season. Here's Creative Lead Robbie Stevens with the details.

In Season 11 we're trying something new with how and where you can earn Seasonal rewards.

So far, every Season in Year 3 has followed a formula where the Seasonal activity (Vex Offensive, Sundial, Bunkers/Seraph Tower) asks for a significant amount of playtime to earn new rewards. While we believe that new content should be one of the best places to earn new rewards, we also realize that Destiny 2 is a big game and it can be frustrating to have so much of your playtime dictated by and focused solely on Seasonal activities.

So, in Season 11 Seasonal rewards will drop from completing core activities (Strikes, Crucible, Gambit) as well as basically every other activity in the game, (see the full list detailed below). We want to make engaging with the entire game feel rewarding, and for every play session to give you a chance at earning Seasonal loot. In addition to new rewards, Season 11 also features two returning weapons each from Season of the Undying, Season of Dawn, and Season of the Worthy, for a total of six weapons that are free for all players.

Okay, we've talked about some of the places where you'll earn rewards in Season 11, now let's talk about how you can influence those rewards to chase god rolls and high-stat armor.

Over the last few Seasons we've introduced Weapon Bounties that give you agency to chase specific rewards. While addressing bounty fatigue will be an effort that extends beyond Year 3, for the upcoming Season we've moved away from Weapon Bounties as part of that effort. Instead, we're introducing a new type of [REDACTED] Engram that contains the majority of the Season 11 rewards, and by spending Seasonal currency you can influence the contents of this [REDACTED] Engram.

To clear up any confusion let's imagine if we launched this [REDACTED] Engram in Season of the Worthy. Imagine this engram contained all the Season of the Worthy weapons and armor. Now imagine you could take this engram to a Seraph Bunker and spend Seasonal currency to Focus the contents of this engram so it only contains the Seventh Seraph SMG and Shotgun. By focusing [REDACTED] Engrams in Season 11 you can choose your rewards, this includes the ability (once you've earned it) to Focus engrams so they only contain Season 11 armor with high-stat packages.

Here is preview of the [REDACTED] Engram focusing categories that all players can access after completing the Season 11 opening quest:


When Season 11 launches, all players will get three focusing categories and Season Pass owners will have access to an additional 15

List of Activities that Reward [REDACTED] Engrams in Season 11:

We hope this preview of Season 11 gives some insight into how we're approaching the communities' feedback in the short term.

Earlier this week, we wrapped our Guardian's Heart Charity Initiative that had been going strong for the last month. We asked you to help support Direct Relief in their efforts to deliver supplies to hospitals and healthcare workers around the world. Guardians everywhere answered the call in full force and together you raised $788,923.19. Smashing our goal of $700k.

We'd like to thank everyone who donated, and everyone who volunteered their time to help spread the word by streaming in one of the 39 Bungie Bounties that we put on during the event. It's been inspiring to watch this community come together once again to make the world a little better during a tough time.

The Player Support team is keeping an eye out for any issues players are reporting and have updates on how we are handling them.


UPCOMING RESOLVED ISSUES
Below is a list of issues that will be resolved with the release of Hotfix 2.8.1.2:

On Friday, May 8, a potential fix was implemented for those experiencing frequent WATERCRESS error codes. Since May 8, we have been closely monitoring WATERCRESS reports and have noticed a significant decrease in WATERCRESS errors appearing. While we continue to progress toward a resolution, we recommend anyone continuing to experience WATERCRESS errors to report in our #Help forum.

We are continuing to monitor increases in BEETLE, RABBIT, BEAVER, and ANTEATER error codes.

The Guardian's Heart Initiative ended on Tuesday, May 12. Any donations made after 10 AM PST on May 12 are not eligible for the Guardian's Heart emblem.
If you donated within the Initiative's timeframe and still have not received your emblem, please contact the Bungie Foundation with your donation receipt order number and date of donation for assistance.

Now let's check in with the movies that caught our eye this week.

Movie of the Week: Velocity

Honorable Mention: Eye of the Storm

As always, these winners will be receiving a special emblem as proof that their creations were featured here. If you won, make sure you have a link to your Bungie.net profile in the description of the video.

We hope you enjoyed the little preview we gave you of the new [REDACTED] Engram coming next Season. Next week, we'll share more changes coming to how you earn rewards in Season 11. Some of you know what a world loot pool is. Many of you have no idea what I'm talking about. Don't worry, we'll talk next week.