This week at Bungie, we talk about Rhulk finding his chill and a new way to enjoy raids and dungeons.

It really is almost mid-April already, huh? As the weeks continue to feel like they fly by in a rush for summer, we're excited to show off even more changes coming to Destiny 2 while we continue working on what the future means for our favorite space-faring heroes. In the next few weeks, we'll be diving through some weapon sandbox changes and other topics of interest. One of the changes that we are ready to talk about now, however, is a new Rotator system for some of the more challenging activities in-game; particularly, raids and dungeons.

Ready to kick off another weekly TWABtastic celebration? Let's dive right into it then, shall we?

Kind of like Dungeons & Dragons, if you squint one eye and close the other.

Before diving into what's next for activities like raids and dungeons, we did want to shout out that players can finally take Rhulk's kicks to the face at an even higher ferocity, because Master Vow of the Disciple is dropping next week. For the deets regarding the ramped up difficulty, Guardians should know that the Power level is 1580 with a seasonal cap at +30. For those Challenge-hardy players, completing Challenges at Master difficulty will offer progress towards the raid Seal. Each encounter completed also has the chance to drop an Adept version of a given weapon for the raid.

It's a neat way to up the ante a bit when taking on the more challenging aspects of Destiny 2. Master Vow of the Disciple drops next week on April 19, so make sure to knock out any leveling needed and get that gear in tip-top shape, because Master difficulty is never something to take lightly.

As players continue exploring the Throne World and uncover the true nature of the Witness's influence, we've heard your desire for reasons to return to previously released raid and dungeon content loud and clear. One way we're freshening up the raid and dungeon experience in Destiny 2 is by developing a new rotation of featured content that we think you'll like starting in Season 17. This is designed to make raid and dungeon content a bit more enticing over the course of a Season, while also providing more ways to play when jumping into different activities with friends and clanmates.

Essentially, we're breaking up our new Rotator system into Seasonal and Weekly categories so that players can have a little additional freshness when taking on the weekly hunt for power. Let's start with our Seasonal rotation, since this implementation is short and sweet.

Each Season, the newly released raid and dungeon will grant Pinnacle rewards for all encounters. As an example, in Season 17, Vow of the Disciple and the upcoming [REDACTED] dungeon. Outside of these, we'll have a raid rotator and a dungeon rotator, each offering a Pinnacle reward once completed.

For those wondering about the weekly rotation, this particular inclusion will have a chance to feature all raids and dungeons not listed as the Seasonal rotation. Want to revisit the Vex in Garden of Salvation? Do it! Want to go toe-to-toe with Riven because you like to feel hungry for that wildly impressive (and stressful as all heck for players like me that are prone to panic) final encounter? Weird, but get on with yo' brave and Light-driven self. Get that bread.

Rewards, what's different there? For the weekly rotation, completing the final encounter in any of the chosen raids or dungeons will award a Pinnacle drop from a Weekly Challenge. For any raid or dungeon that offers a higher difficulty, such as Master Vault of Glass, that higher difficulty will also be available to select should players be itching for an additional challenge.

Oh, wait, you said you liked farming? We got you there too with the new rotator system. All lockouts on encounter rewards for Legendary gear are being removed, which means all Legendary drops in both raids and dungeons will be 100-percent farmable if you so choose. Throw on some lo-fi music, grab a cozy beverage, and farm to your heart's content. Or don't, the choice is yours (which is the point!).

We are hitting that mid-season mark, which means it's time to do a little housekeeping. We're tackling a neat little failsafe for players when carrying objects for The Wellspring: Attack, some fine-tuning to Rhulk and his ilk in the Vow of the Disciple raid and taking on a few more Gambit changes to continue making Drifter proud.

We've got a small patch preview to share - nothing major, tempering those expectations now, but here are just some of the tweaks coming down the pipeline for Destiny 2 that you can look forward to before they go live later this month on April 19:

Vow of the Disciple Raid:

The upcoming patch will also tackle notable stability issues and crash fixes, Xûr's wonky stats for his wares, and Rahool's Destination Materials for sale will resume rotating at reset.

These are just some of the tweaks players can expect when these, and other patch note items, go live on April 19.

Moth Man and his Moth Plan.

It's that time of week again, time for our handy dandy Player Support Team to bestow upon us their mighty wisdom in the mightiest of mighty fashions. Or, at the very least, an easy-to-read breakdown of known issues and recent changes you should be aware of.

Plus, they're just really cool (but I may be biased).

Anyway, this is their report.

As of April 11, 2022, Destiny 2 and its expansions (the Forsaken Pack, Shadowkeep, and Beyond Light) left the Xbox Game Pass for PC in the Microsoft Store. Players who were accessing the Destiny 2 DLCs through the Xbox PC Game Pass will need to purchase them to maintain access to the expansions.

As of April 14, 2022, changes to in-game text chat have been implemented, effectively adjusting a recent change that caused players to run into a "too many messages" alert earlier than expected. This has been corrected to allow for more time to use in-game communication, which will help allow for fireteam messages to run more efficiently, especially during instances like the Vow of the Disciple raid where multiple callouts are necessary.

Next Tuesday, April 19, Destiny 2 Update 4.0.1 will be released. View our Destiny Server and Update Status page for maintenance times, as well as the timeline below:

Below is a list of known issues that are scheduled to be resolved with Update 4.0.1:

We are currently working to grant The Cleaver emblem to players who completed the Vow of the Disciple raid during the Contest Mode extension. Players who qualified for the emblem can expect to receive it during the week of April 19.

There are some lingering issues about players not getting emails, even when going through the troubleshooting steps we have listed here. The team is still looking into the issue and are actively tackling the problem head on.

We will provide an update on the next steps for emails as soon as we are able.

A Meme and a Freestyle Rap Walk into a Bar

Stop us if you've heard this one.

Movies, you love to see 'em, right? One fan-made clip I just had to include because Hunters are taking up all the conversation with their sweet Void 3.0 makeover, so I gotta do my part to give my Titans some time to shine. What better way to do that than with an awesome freestyle? Other than punching random objects and throwing a shield around like you're some kind of purple Captain America.

The next video is a meme video of biblical proportions (I've got jokes, you'll see what I mean when you watch it).

Movie of the Week: Freestyles with a Titan

Freestyles with the titan in destiny 2! pic.twitter.com/8OccH5pERv

We can't forget about art now, can we? Oh, nay nay, so let's jump right in with a few of our favorite pieces from the week, including some friendly competition amongst the Team Mech and Team Monster folks.

Art of the Week: Team Mech

A little late but I think it was a little obvious what side I was going to pull for in Bungie's little Mechs vs Monsters poll (the helmet and chest on the cyclops titan is killer tho)
print: https://t.co/vXhx1M3MDb#TeamMechs #Destiny2 #Destiny2Art #AOTW #destinythegame pic.twitter.com/b5aoa5r3dd

Art of the Week: Team Monster

We can't just let competition have all the fun, so you know what time it is? It's b-b-b-bonus round time! This art comes to you from Leyla and puts a leggy spin on a classic piece of art:

Art of the Week: The Creation of the Disciple

-- The creation of The Disciple --
In collaboration with the wonderful @atmosfioric
-------
Lineart, background and lighting; Me
Coloring, amazing shading and after effects; @atmosfioric
-----#Destiny2Art #AOTW pic.twitter.com/d2Kn641b2D

As always, keep those creative juices flowing and don't forget to tag us in your amazing Destiny 2 art and movie submissions with #Destiny2Art, #AOTW, and #MOTW.

The Results are in!

One last thing before we let y'all go! We've got monsters, we've got mechs, but who was the ultimate winner? Recently, we shared a poll that players could partake in deciding what sort of armor ornament would be at the ready when Festival of the Lost rolls around later this year. Monsters were up for grabs for the second year in a row, but it looks like the Mech design was what truly captured Guardian hearts around the globe. Let's break it down: Team Mech won by a hair, taking up 52% of the votes, but don't count out Team Monster, because they came in like a wrecking ball at 48% of the votes. 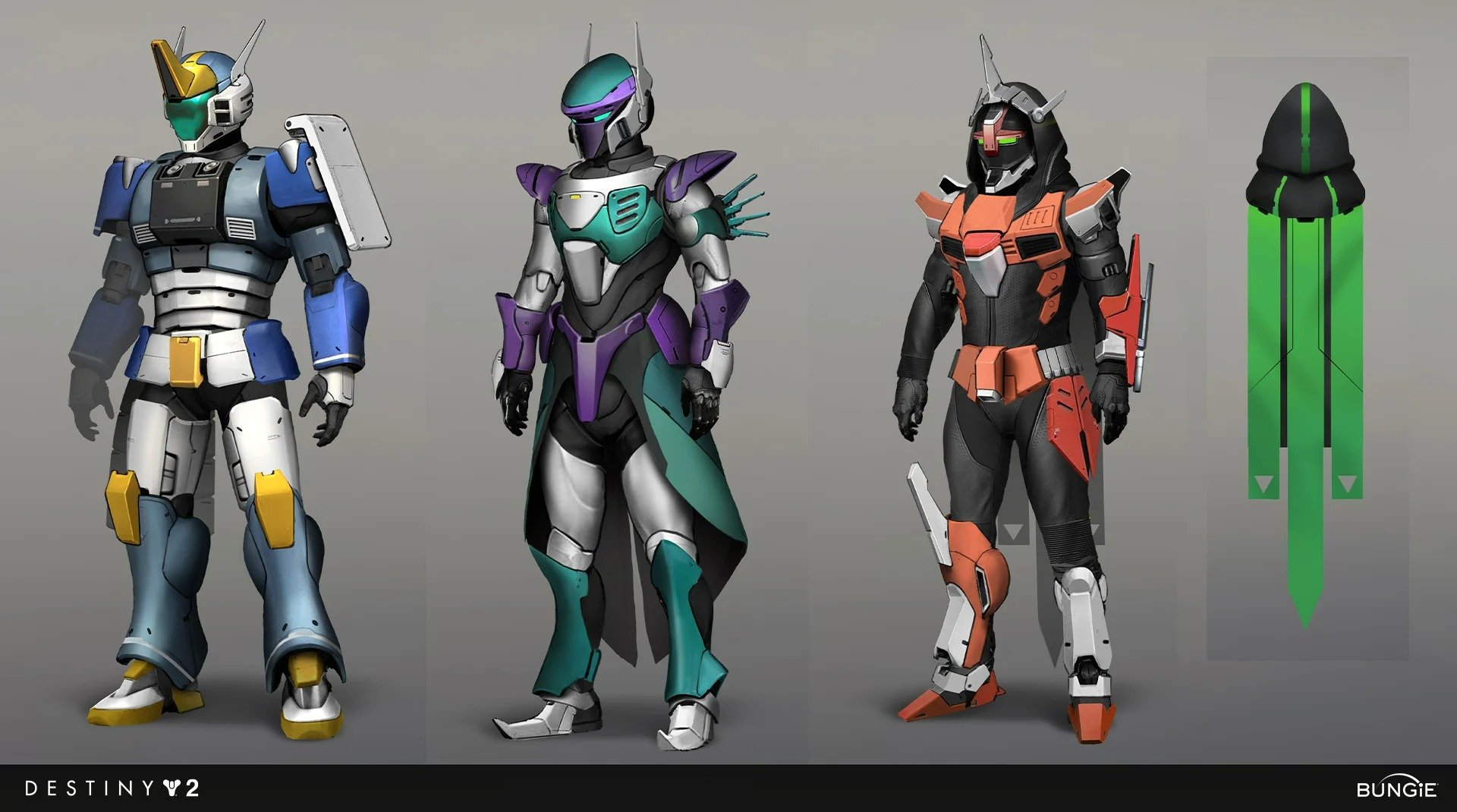 As we rapidly approach the next part of the story as Season of the Risen continues, we're excited to reveal what's next for our Guardians and their corresponding shenanigans. Keep it tuned in here to our weekly TWABs for more info on what's coming down the pipeline, including more weapon changes, a new Gambit Labs, and more.

Until next time, stay kind, drink lots of water, and go out there and do some good in the world this week. Catch you on the flip side, Guardians!