From the desk of Senior Designer Jon Weisnewski:

Greetings internet friends! Did we miss each other? I hope so. We're back once more to talk about weapon and gameplay tuning that is headed to Destiny once the April update goes live. Designer Greg Peng and I have been working hard turning knobs, digesting data, playtesting, and then playtesting some more. As with all of these updates, I imagine some of these changes will be anticipated... and some not. I'm sure you'll discuss this at length. Shaxx and I will be waiting for you in the Crucible on April 12.

AUTO RIFLES
High Rate-of-Fire (RoF) bullet hoses have been leading the pack in terms of competitive viability. Low RoF auto rifles are slightly behind their faster firing brethren. We're tipping the scales ever so slightly on these weapons to try and create more options.

PULSE RIFLES
As with the auto rifles, the lowest RoF pulse rifles aren't quite as effective as the faster firing models. The damage increase here doesn't reduce bursts to kill against high Armor players in PVP, but it will provide more damage per burst which will help when team shooting and getting clean up kills.

HAND CANNONS
Hand Cannons were running lean on ammo inventory during PVP streaks and lengthy PVE encounters. We are increasing their ammo inventory amounts by a bit to not leave you scrounging for white bricks too often, but not so much that you don't need to worry about making shots count.

FUSION RIFLES
The changes made in the last patch were somewhat more in depth than a blanket stability reduction: changing the ADS/Hip bolt spread paradigm as well as charge rate/damage tradeoffs. Rather than continue to play with nuance, this time we're just going to do a blanket stability improvement.

SNIPER RIFLES
The intent for Sniper Rifles has always been lethality at a distance using a measured approach. There are a few scopes and models of Sniper Rifles that are pushing the limits of "distance" and allowing for pretty effective twitch combat shooting at what many would consider medium range. These changes aren't intended to remove that style of combat, but they are intended to put the player at slightly longer ranges for that style to be as effective as it is currently.

We've heard pretty consistent feedback about the prevalence of special and heavy ammo in The Crucible. Data shows an uptick in Special weapon time equipped starting around December. 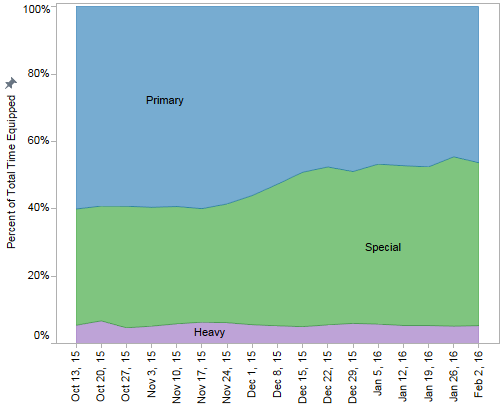 A while ago, the PVP design team made some changes to ammo spawns in 3v3 gametypes, and they'll have some more changes to PVP ammo in 2.2.0. In addition to game mode ammo rules, we want to put some limits on how much ammo players get and horde during a PVP match.

Ally resurrection is a huge strategic factor in high intensity PVP and PVE. In the safety of cover or during a lull in combat it is an obvious helping hand to extend to your dead buddy. However, when an ally meets their end smack in the middle of a frantic firefight it should be with great peril that one risks their safety to bring them back. There are a number of elements in place that help players assess the risk/reward of sticking their neck out to revive a friend: time to resurrect, interactive prompt distance to Ghost, and resurrection overshield.

Right now these elements can be used in a variety of ways (and in combination with exotic armor) to greatly reduce the risk of bringing back a downed Fireteam member in the heat of combat. The downstream result of that starts to trend towards a trivialized death penalty and recklessness during the activities that have been built to require precision gameplay.

Eye of the Storm 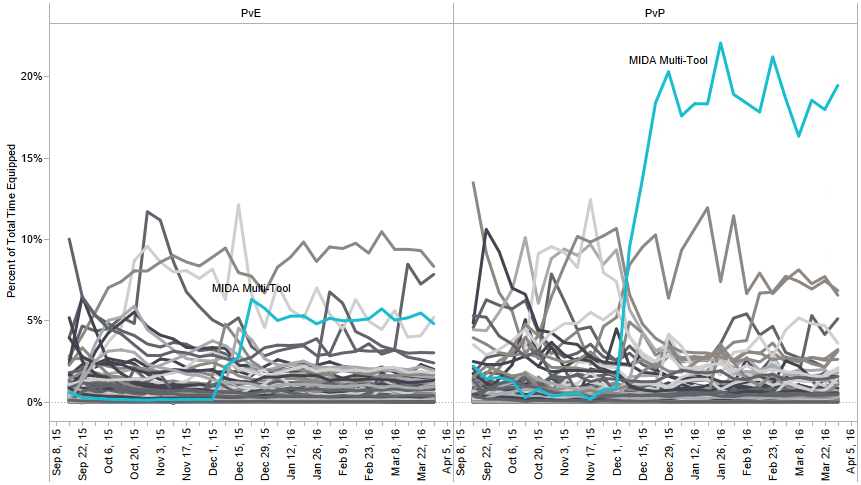 Ignoring popularity, we think MIDA is fairly balanced in the global scale of weapons but I'm sure many non-MIDA users are starting to get tired of seeing that name come up in their death screen. Considering the popularity of the weapon we wanted to preserve how it feels to use but thought it was best to make it a little less horrible to be on the receiving end.

Since we added the Spinning Up perk to this weapon, it has become the dominant playstyle for Suros users. The base damage increase of this archetype made Spinning Up pretty deadly, so we pushed out the perk activation by 4 shots. We are hoping to make the Focus Fire option a little more enticing by adding a base Range increase on the node. When selecting Focus Fire along with other Range enhancements on the grid players can now push the weapon to a max Range stat.

Hawkmoon
Although Hawkmoon still has the highest damage to magazine ratio for Hand Cannons, the last round of changes left the weapon feeling inaccurate. It is getting a Range increase to help effective range and accuracy.

The Last Word
In 2.0 we reduced the effective range of The Last Word, but the hip fire accuracy and damage increase provided by The Last Word perk are still pretty strong when working together on this weapon. For the players who have mastered hip fire precision shooting, this weapon can cause 2 hit precision kills which is a very fast kill time on a full auto weapon. To keep the time to kill in line with other exotic primaries, we are removing the damage increase granted from hip fire. The Last Word perk still grants generous Stability and Accuracy when firing from hip.

Thorn
Thorn is back and better than ever! (Just kidding!) This pass on Thorn maintains the power fantasy of using the weapon in all activities, but makes it significantly less difficult to fight against in PvP.

Ice Breaker
Like Thorn, even though this weapon is "on the bench" in terms of current power level, many people are using it to great advantage to work around ammo restrictions. This is predominantly occurring in high-skill PvP matches, so these changes are targeted at that skill level: aggressive snipers using Ice Breaker for medium range quick sniping will be more affected. For casual players, these changes are targeted at reinforcing Ice Breaker's intended role as a slow paced, long distance combat tool.

Dreg's Promise
When it was released in House of Wolves it was one of two total Sidearms in the game. In the current range of Sidearm options, Dreg's Promise is rarely used so we wanted to give it some attention.

1000 Yard Stare
This weapon has one of the highest adoption rates for any gun we've ever released. I think there are a number of factors that contribute to this, but the end result is a pretty remarkable spike in weapon usage. 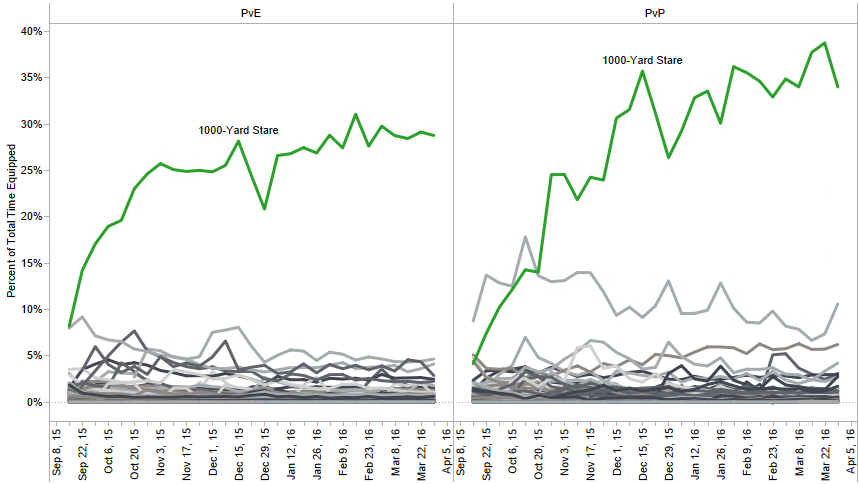 This is an interesting situation. We don't like punishing a relatively-balanced weapon just because it is popular, but we also want players to feel like they have options. For now, the safest way to reduce this spike is to preserve the feeling of the weapon, preserve the talent grid rolls that many players are no doubt happy with, and just pull a few rounds out of the Inventory.

Quillims Terminus
The Raid Machinegun is one of the most lethal and ammo-rich heavies in the game. As such, it has become the default choice for most people who have it. Data! 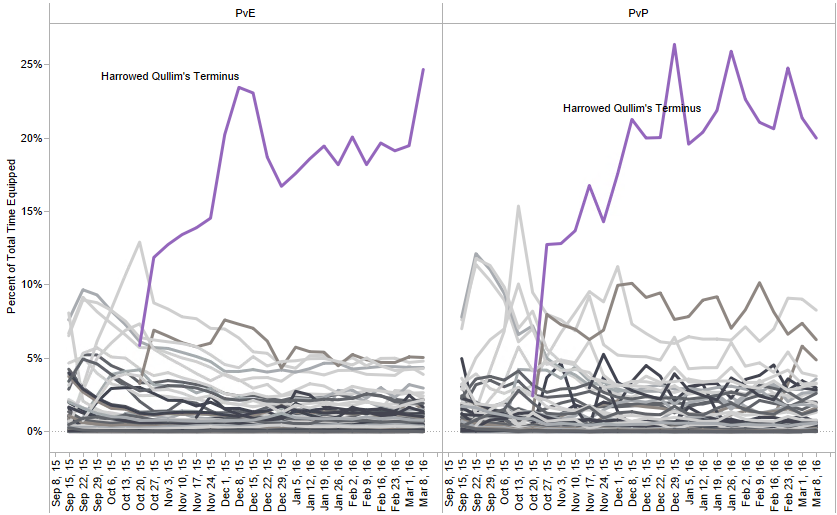 Not to keep banging the same drum, but it is important to us that players feel like they have options and that there isn't a single ultimate weapon per archetype.