This week at Bungie, we revealed Forsaken.

On September 4, we're kicking off the second year of Destiny 2 with a brand new story. We have some bold plans to take you to new places and change the way you play. If you haven't seen it yet, check out the ViDoc that revealed Destiny 2: Forsaken.

We're committed to reinforcing the hobby for every player of Destiny 2, and we have a lot of changes coming in Year 2 that do just that. The ViDoc was followed by a live conversation on what we have planned for September. Didn't get to tune in to watch it live? We've got an archive for you to watch at your leisure.

You'll learn a lot more about this new story we're telling at E3. Gambit will be playable at both E3 and GuardianCon.

We also updated the Roadmap this week to give you details on what all players of Destiny 2 can enjoy this September. There were also some additions to the summer update, including 6v6 Quickplay and a permanent Rumble playlist. Prestige Raid Lairs are also coming in 1.2.3 and do require ownership of the expansion they were delivered in. 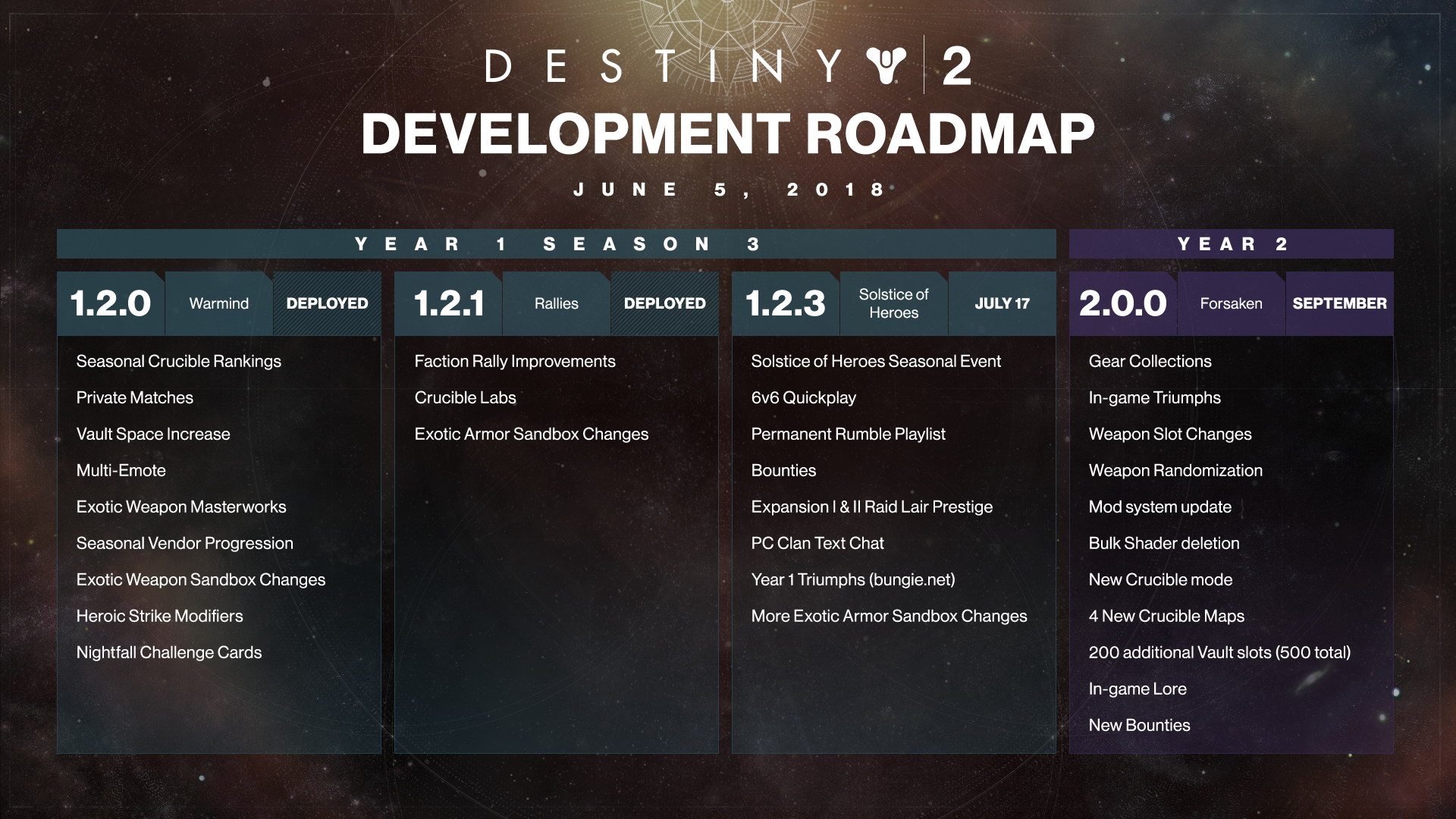 Another topic of the stream was the new Annual Pass. As the evolution of the Expansion Pass that delivered content like Curse of Osiris and Warmind, the Annual Pass is a new plan for how we'll give hardcore players more ways to fight their enemies, collect new loot, and customize their characters. Here is Game Director Christopher Barrett to tell you more about our goals.

Christopher: Destiny 2 Year 2 begins with Forsaken, and throughout that year we're going to be focusing our teams on delivering content that gives players reasons to come back to Destiny. This means new activities, endgame challenges, progression systems, and awesome rewards. With the Annual Pass, we want to deliver content more frequently throughout the entirety of Year 2, with three releases in Winter, Spring, and Summer.

In addition to everything new in Forsaken and the Annual Pass, we're continuing to fully support Seasons and deliver updates to all players of Destiny 2. During each Season, all players can expect new rewards to earn, new Crucible maps and modes, improvements to gameplay features, recurring activities, special events, and more.

This graphic puts everything we have planned for year two on the map: 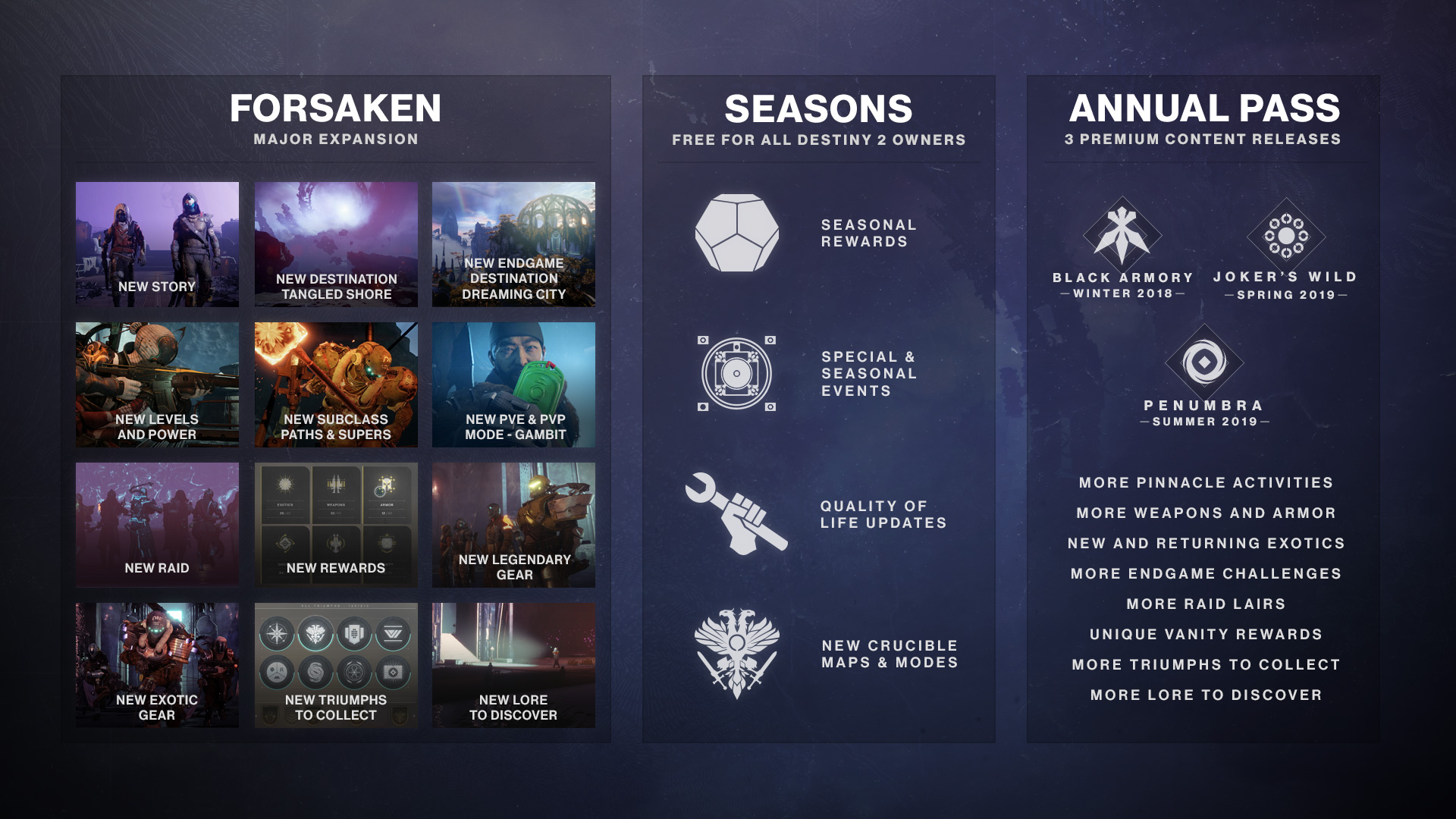 We're excited for the second year of Destiny 2. You'll soon learn more about what to expect in the coming weeks and months leading up to September when Forsaken and the Annual pass officially launch. 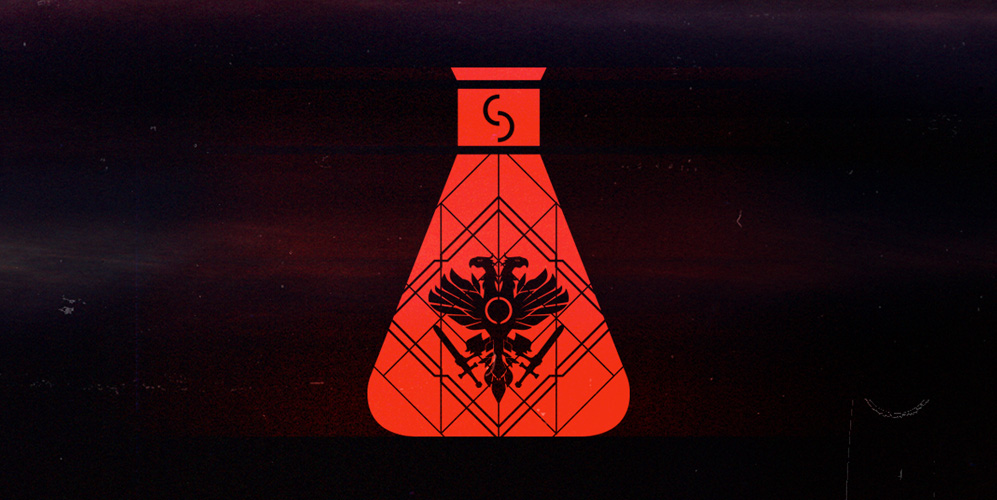 Last week, we rolled out Crucible Labs to give you a first glimpse of Crucible content still under development. This was our first experiment in the lab, but definitely won't be our last. Senior Crucible Designer Andrew Weldon is here to debrief you on our conclusions.

Thank you to everyone who participated in our debut Crucible Labs playlist last week!

Understandably, many of you are curious about the decision-making process behind developing Showdown and deploying it with Labs. I wanted to take some time to talk briefly about these decisions, what they mean for the first reveal of Labs, and how this first Labs run will help shape our future.

Every mode you've ever played in Destiny has been the product of design, iteration, playtesting, more iteration, more playtesting, polish, and final bug fixing. This takes a lot of time and effort across multiple departments within the studio, and as players, you don't get to see it until it's finished and in the game or featured in a press event or public beta.

Labs gives us an opportunity to open up some of this development process to the community, so you can be there with us earlier. But rolling out a feature like Labs is not without risk—we're showing you unfinished work that is below our shipping bar, and we expect there to be issues that need addressing.

It was important for our first Labs to be measured and cautious. Our primary focus for this first round was to make sure that Labs itself worked, and Showdown made for a great simple test case that we already have some familiarity with shipping through Crimson Days and Doubles. Now that we've successfully launched Labs, we'll be able to consider more options over time, ranging from new competitive experiences to more silly and just-for-fun experiments.

In general, expect that any mode that deploys in Labs:


The broad feedback to Showdown in this setting has shown us there is a lot of room for improvement, and that's OK! Some of your favorite modes in Destiny have had terrible playtests where we're left wondering if we can even save them. Some modes that showed promise never came together the way we hoped and had to be left behind. This is a normal part of the development process that we're inviting you to join, and we welcome your feedback and criticism as we make decisions not only in this mode, but in the future as well.

You may very well see Showdown again in the future with changes based on feedback from this week, and we have some additional Labs experiences in the pipe in our Summer update. Over time, we'll continue to get into the zone and lock down the best process and path to deploying new experiences for you. We're glad to have you along for the ride!

The Night Is Dark

Destiny Player Support keep the trains running on time. We don't have a lot of trains, but they do keep you up to date on game-impacting issues and when fixes are on the way.

Faction Rallies
With the release of Update 1.2.0, Faction Rallies now feature the Renown system. After pledging to a faction, players may earn Renown by completing a public event or patrol, or by defeating high-value targets on destinations. Players may earn additional Renown if they are wearing a full armor set for the faction they've pledged to. There are ways in which players can lose stacks of renown:

The following issues have been identified, and are currently under investigation:

If you encounter issues impacting Renown or Faction Rallies ornament progress, please report to the #Help forum on bungie.net.

Let's get to the movies shall we? Every week, we pick our favorites from the Creations page and show them off to the world. Here are this week's winners.

It's been a fun week. We love getting to finally reveal the exciting things we've been working on. And we are not done yet. E3 is next week and we will have our away team ready to give you some more details about Forsaken. After that, we have all summer to fill in the blanks as we know you have a lot of questions.

Get out there and support the faction of your choice. We'll let you know who came up on top after the reset on Tuesday.