This week at Bungie, we're on final approach.

This is the last blog update before-saken, and we've just served up a menagerie of content to get you prepared. If you've been looking to avoid spoilers, don't click "play" on any of the following videos. If you're chomping at the bit for info, this was cooked up just for you:

The hunt is about to begin, but we also have a long road ahead of this year. To share our goals for Forsaken and what waits beyond launch, we invited developers from the team to go on the record. Check out the new ViDoc to see what we have planned for the second year of Destiny 2:

If you're looking for a quick reference on what's covered in the ViDoc, we've also made a roadmap with details on Forsaken, Annual Pass content, and the free Seasons updates.

A single weekend is between you and Forsaken. We have a few treats ready to help you pass the time.

On September 1, every player of Destiny 2 will be invited to try Gambit before the launch of Forsaken. For 24 hours, fireteams will bank motes in a race to beat their opponents and burn down a Primeval.

Tomorrow, before the games begin for everyone, we're inviting some special guests into our studio to show how it's done! 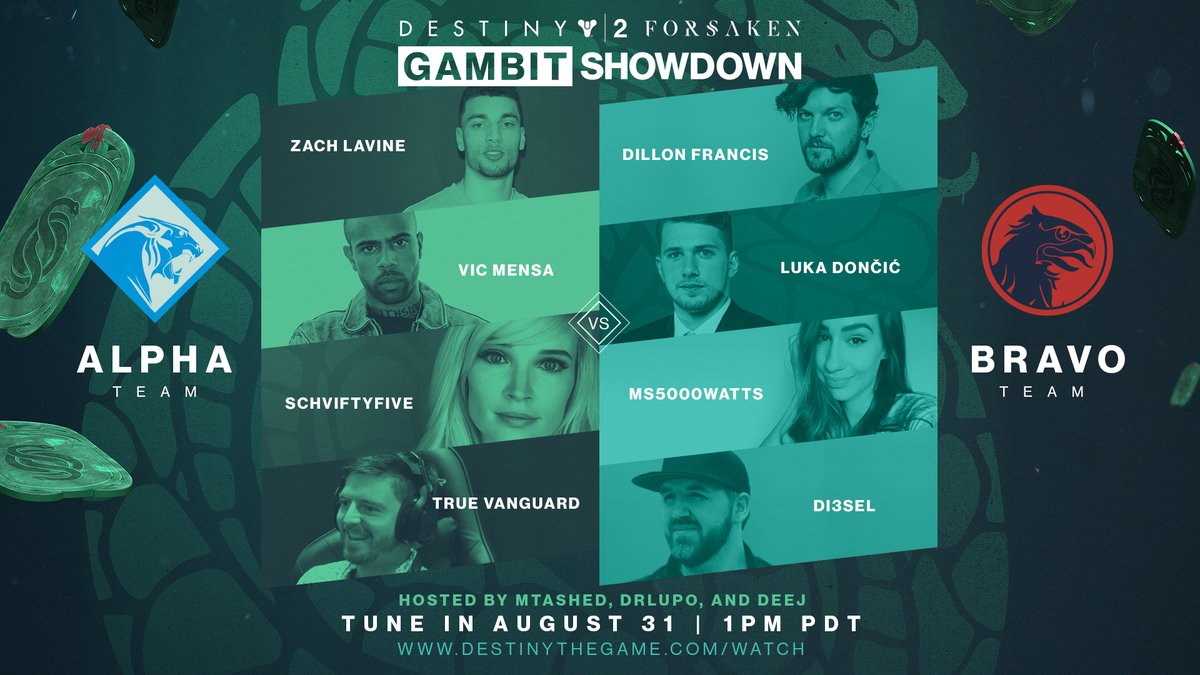 The following day, all are invited to join the fun. This is the final stop before launch, and we'll be out there in the wild with you. If you happen to catch a Bungie employee on the opposite team, show 'em your favorite emote.

We're also planning to place a few bounties during the Gambit Trial event. If you want a chance to earn the "Sign of Mutual Combat" emblem, stay tuned to @Bungie for future announcements.

Still hungry for a bit more Gambit before September 4? Stop by and see us at PAX 2018 in Seattle! With the convention center in our back yard, we'll be here all weekend to host Gambit matches, hang out at signing tables, and offer some sweet Destiny gear for purchase from the Bungie store.

Location: Booth 229, on the fourth floor.

Play Gambit—Earn an Emblem
We will have Gambit playable on the floor at PAX. Stop by the booth and try out the new competitive co-op game mode all weekend long. Anyone who plays will also receive a code for our event emblem.


Bungie Store—Snag some Swag
Available throughout the weekend, the Bungie Store will have the following merch (and more!) available for purchase. 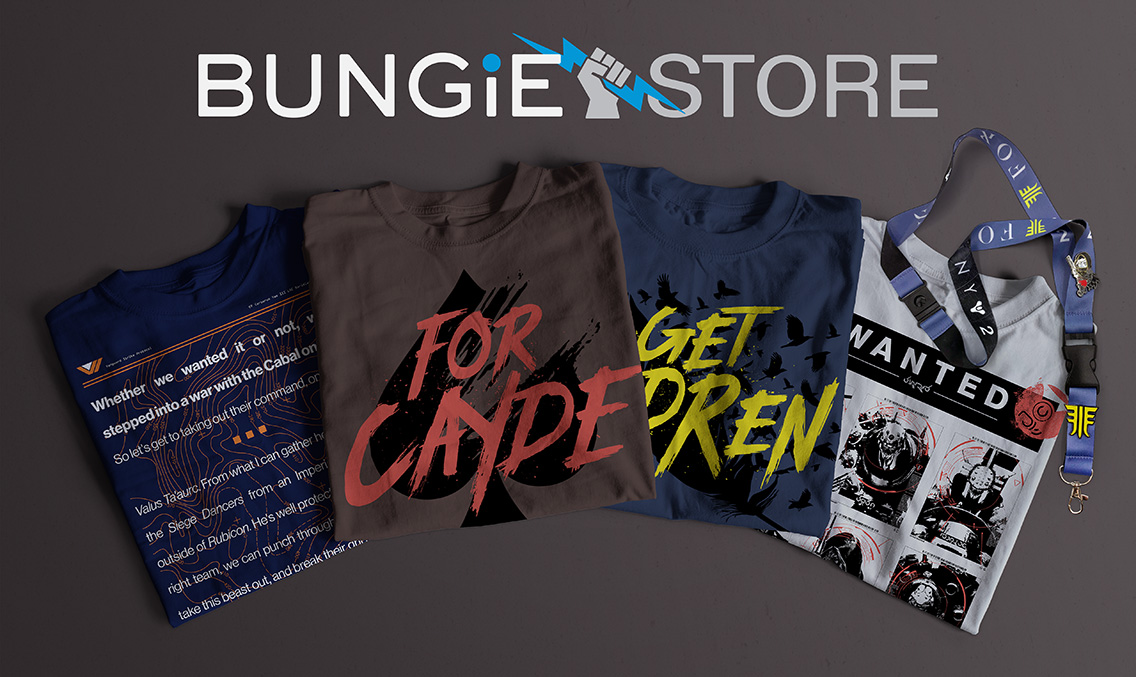 Signing Tables—Meet the Devs
We've rounded up a few developers from various teams who've brought Destiny and Destiny 2 to life! If you'd like to shake hands and snag an autograph, here's the lineup.

Cosplay Meetup—Meet the Guardians
Sunday 9/2, 1-2:30 PM
Each year, we're humbled and amazed by the talents of our community. If you've ever wanted to see hand-crafted exotics or snap a photo with your favorite Destiny 2 character, chances are they'll be there! For details on location, check out the Destiny Meetup at PAX West group.

The team has been hard at work the last few months improving their toolsets to watch over Destiny 2.  They have some important information to share on how we're improving your search for Glory in the Competitive playlist.

Security Team: Throughout Season 3, we've been working on improvements to our systems that identify players who may be tampering with their connection to Crucible matches or breaking the Terms of Service for Destiny 2. We have some news to share, but first a point of clarification...

We have received reports from players who have been using bungie.net or other third-party websites to attempt to identify wrongdoers. We want to clarify that our internal tools have much more detail, which players do not have access to. For example, a player who returns to orbit or switches their character will show as did not finish on a third-party website, while our internal tools have much more detail on the reason they left the match. This helps to ensure that we do not hand out restrictions when opponents are disconnecting due to temporary networking or ISP issues or opponents leaving of their own accord.

Using this data—and working with the PvP team directly—we've recently updated our detection and analysis tools and re-checked the previous four months of matches from the Competitive playlist.

Effective September 4, 2018, we will apply more restrictions and bans to player accounts that benefitted from opponent disconnects at a highly abnormal frequency throughout Season 3 with our improved detection methods. This will include "voluntary" disconnects when players are repeatedly matching against the same opponents.

We are also updating our Account Restrictions and Banning Policies to detail the potential forms of punishment.

As we begin to apply this moderation, we will be crosschecking matches to ensure the proper levels of punishment are applied.

We'll continue to apply and revise our detections throughout Season 4 and beyond.

If you believe you've encountered a player who is breaking the terms of service, please see Report Suspected Cheating on help.bungie.net. This page details all available forms of reporting to Bungie for the platform on which you play.

As a final note, thanks to everyone who plays Destiny 2 legitimately. We appreciate the time you invest in our game, and we're working hard to ensure everyone has a good experience when rightly earning their rewards.

Since the Year 2 deployment on Tuesday, we've seen reports that matchmaking time in the Crucible may be taking longer than usual. While no deliberate changes to matchmaking were deployed in Update 2.0, we have been investigating this issue.

We are planning to deploy a fix that we hope will increase the speed of matchmaking queues. As our investigation continues, please stay tuned to @BungieHelp for updates on our progress.

Upon the launch of Forsaken, skill matching will work in the same manner it has in recent weeks (i.e., no skill-based matchmaking). In the near future, we will preview any planned improvements to matchmaking in Crucible Labs first, so we can tune that experience collaboratively. As always, our commitment remains to communicate all changes to the competitive ecosystem in advance right here on bungie.net.

As we said last week, things are a little weird right now. Player Support has been on the front lines, troubleshooting issue reports and identifying workarounds for some of the oddities you might be seeing since the release of Update 2.0.0.

This is their report:

Destiny 2 Hotfix 2.0.0.1
On Tuesday, September 4, Destiny 2 will undergo maintenance to receive Update 2.0.0.1. The conclusion of this maintenance will mark the launch of Destiny 2: Forsaken, and this hotfix will be required to log in and play. For the Hotfix 2.0.0.1 deployment schedule, please see the times listed below.

For Hotfix 2.0.0.1 patch notes on September 4, players should keep an eye on our Updates page or follow @Bungie on Twitter for live announcements.

Destiny 2 Update 2.0.0 Known Issues
Over the past few weeks, we have warned players that the weeklong transition between August 28 and September 4 may be a rocky one. In direct response to player reports on our #Help forum, we have listed below some of the known and emergent issues we've tracked since the launch of Update 2.0.0. Please be aware that not all of the issues below will be resolved in Hotfix 2.0.0.1.

For the full list of known issues, as well as possible mitigation steps, players should see our Update 2.0.0 Known Issues list.

Gear Infusion and Level Requirements
Once Destiny 2: Forsaken is live on September 4, players may begin increasing their Power and character level beyond their Year 1 limits. As with all increases to player Power in Destiny 2, players should be aware that infusing gear with a requirement above their current character level will make the infusion recipient unavailable for use until the player levels up.


Players should pay extra attention to the character level requirements on their gear as they climb to max level in Destiny 2: Forsaken.

Mod Changes for All
As a reminder, mod changes will take full effect on September 4 at the launch of Destiny 2: Forsaken. Listed below is the full experience that players will encounter once Hotfix 2.0.0.1 becomes available.

Players who generate their code by this deadline have until September 30 at 11:59 PM PDT to redeem their code at checkout with their shirt order at the Bungie Store. At that time, all remaining T-shirt codes will become invalid, and players may no longer place new Solstice of Heroes T-shirt orders on the Bungie Store.

It's a Space Western

Things have been a bit wild this week. Anticipation is reaching a breaking point, and players are getting creative in their excitement. Here's a sampling of what's been bubbling to the top of the Creations page.

Movie of the Week: What's This?!

[Editor's note: Cheers to all involved in the creation of this week's winner. Check out the Reddit thread here.]

Next week, we deliver the start of a new year in Destiny 2. This week has been refreshing. We've deployed major system updates for Forsaken and a new season of content. Next week finishes off the implementation of changes not only to address feedback, but also to continue the growth and evolution of Destiny 2 and its universe. We're excited to see you continue your journey, uncover new secrets, and take some of the new weapons in the arsenal for a spin.

When Destiny 2 was first released, new legends rose to the occasion. Who among you will be on the first fireteam to clear the "Last Wish" raid? To reach maximum Glory in Competitive Crucible in Season 4? To earn the "Chronicler" seal for completing all Lore Triumphs? Only time will tell, and we'll be celebrating each moment alongside the community.

This next step is a big one. We can't wait to see where the road leads, and we can't thank you enough for being here with us. See you starside.