Stuntmutt just made me sad...

The first commercial collaborations mentioned with respect to Destiny 2 involved Pop-Tarts and Rockstar energy drinks. Stuntmutt had a comment.

Stuntmutt stands with a hefty portion of the fanbase when it comes to a non-speaking player character in Destiny 2...

If you can't Beta, Join 'em

Looks like Stuntmutt is enjoying his time in the Destiny 2 Beta!

First look at The Farm

IGN has posted a video showing off the first new social space unveiled in Destiny 2 - it's called 'The Farm', and it contains both familiar functions (Cryptarch, Postmaster), and new or upgraded ones (fully-scorable soccer, anyone?). Pretty nice! Go watch for lots of tidbits. Thanks, CyberKN.

A kick in the testudines.

It's Vault of Farce Friday! Time to see what Stuntmutt has been cooking up under that shell of his...

P.S.: This is a friendly reminder to always check the file names for Vault of Farce images. ;-)

It's Friday! Sounds like the Destiny 2 Warlock changes are causing Stuntmutt to contemplate his role in the universe.

And this week, I got a Zaouli's Bane. Like I didn't already have enough trouble hitting my target...

FWC rolling in, what I believe young people refer to as, 'da Benjamins'.

(If you haven't played a lot of crucible in the past couple of weeks, you might not have noticed the new Sidearm hotness... or the near-god-roll specimen available from Lakshmi-2. The rest of us have, though.) 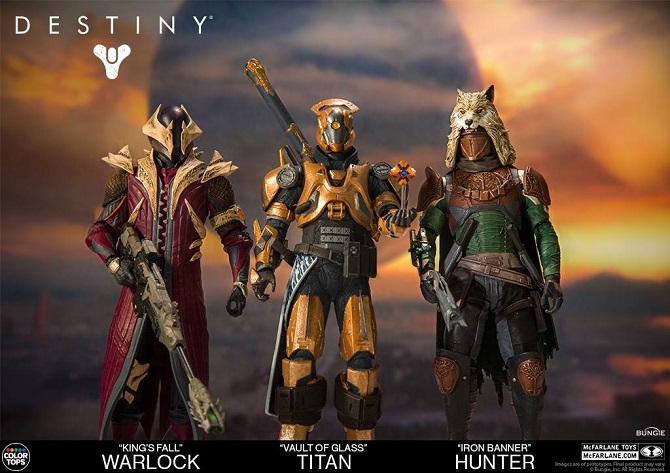 Unoudid stopped by with a lot of great info regarding McFarlane's upcoming line of Destiny products (shown off at the NY Toy Fair). While we should keep in mind that these are prototypes that are subject to change, it's tough to keep from getting excited about the details in everything from Lord Saladin to the life-sized (and surprisingly affordable) Iron Gjallarhorn.

Be sure to read the post (some real great insight from his talk with McFarlane's own Destiny brand manager) and then check out the photo album as well for some great shots. Thanks, Unoudid!

Edit: Unoudid also linked us to photos of Mattel's Mega Construx Destiny figures. Cabal fans should be pretty happy with that Goliath Tank!

Stuntmutt has noticed some... unhappiness in the Destiny universe this week.

A Longshot (Until Tuesday)

Stuntmutt's back, with a fond farewell look at a Crucible favorite. Shotpun, indeed.

So the gag I wanted to do was Xur saying "If I have 50 3oC's in my inside pocket and 125 in my outside pocket, what do I have?" To which the answer is of course, "Someone else's coat."

The Cracks of Dawn

That nice Mr Errera tagged me in a Facebook post about puns earlier this week. I took it as encouragement..."

I was expecting to hear about SRL.
Instead it was a race for who could complain about Rift IB first...

Stuntmutt, despite living in the UK, has managed to work a uniquely American form of insanity into his latest strip. #hattip [Update: Stuntmutt informs me that Black Friday isn't as American as I thought it was. Sorry, world.]

After last weekâ€™s Iron Banner, Stuntmutt has Clever Dragons and Silvered Dreads aplenty. But even so...

Throw Out A Line

We considered increasing the intellectual value of the content we bring you... but then Stuntmutt sent us the latest Vault of Farce. Yeah, we've given up.

Stuntmutt is getting into the holiday spirit. It's a scream!*

*Is not in fact a scream

I think Stuntmutt might be suffering a little bit...

Saladin's a great warrior, but he DOES have some weaknesses...