Unfortunately, they didn't win any of those categories - but congrats to the team for the showing! 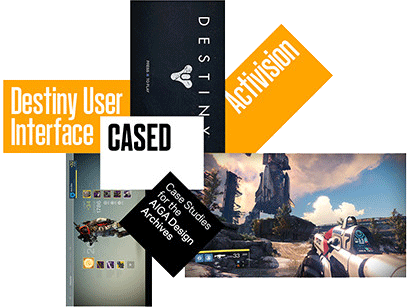 AIGA, the professional association for design, hosted the 2015 Cased competition, and honored 15 design solutions that demonstrate the value of design. Destiny's User Interface was one of these solutions - congrats, Bungie! The writeup digs into how Bungie saw their challenges, and what they did to meet them; good reading! (There are also a bunch of links to articles that have been written along the way, in case you missed any of them.) Be sure to check out the rest of the winners, if you have interest in design - there are some spectacular entries in there!

Destiny: PlayStation.Blog Game of the Year

Destiny has won the community-voted PlayStation.Blog 2014 Game of the Year award! (Thanks to Kermit in the forums for the heads-up).