Breaking Down the Elements

DattoDoesDestiny has always been good at digesting new Destiny info, and helping the rest of us make sense of it all. His analysis of elemental weapon damage is no exception - even Bungie was impressed! Give it a watch, and you'll have a much better grasp on Solar, Arc, and Void damage.

Eurogamer's Digital Foundry got down and dirty with the Destiny Beta (using a PS4), and has written up their findings. Their biggest complaint is some judder sensation to lateral camera movement... but according to urk, that might even get fixed before the Beta ends! (Maybe.) Thanks, DaDerga (and uberfoop).

How big will Destiny be?

GamesBeat has word of a new report from Cowen Research - based on their analysis, they believe that Destiny could be the biggest game of 2014. (Dean Takahashi, the writer for GamesBeat, was surprised at this prediction - he was pretty unimpressed by what he saw at E3 this year.) Thanks to electricpirate for the heads-up.

Eurogamer's Digital Foundry posted an extensive tech analysis of the Destiny Alpha - frame rate monitoring, graphics detail, a look at some of the background stuff... it's a great read. Check it out! Thanks, DaDerga.

DattoDoesDestiny took a pretty careful look at the Devil's Lair video released on Monday - it's nearly a guarantee that if you watch it, you'll learn something you didn't know before. So go watch it!

aPolishKorean did his own analysis of the Community Thank You video Bungie released on Wednesday - he gets credit for a super-fast turnaround, and there are a number of tidbits he noticed that you may have missed. Go watch!

Looking Into the Wild

The recently-released Bungie ViDoc, Out Here in the Wild, has been pored over carefully by a couple of different sites - Rampancy.net devoted episode 54 of its Anger, Sadness, and Envy podcast to the task, while Destiny Updates spent nearly half an hour looking at every detail. Watch 'em both!

Stepping through, frame by frame

Greenskull, from ReadyUpLive, has already released an analysis video of the Out Here in the Wild ViDoc - watch it to see if you've missed anything!

Ragashingo decided to do a frame by frame analysis of the Destiny E3 demo - he provides a great deal of interesting speculation regarding story and gameplay. Join in on the conversation!

Eurogamer's Digital Foundry ran the Destiny E3 demo through their standard framerate test, and found that "even at this early, pre-production phase, overall performance is tight." Beyond just the framerate, though, they liked what they saw - go read the whole review! Thanks, broony.

Destiny Updates stopped by our forum to announce his analysis of the E3 Gameplay Trailer - he walks through the trailer and points out all sorts of details you may have missed (I know I certainly missed a few). Go watch - and see what speculation inspires YOUR imagination!

Digitial Foundry posted a video analysis of the Destiny E3 gameplay demo - looks like the game is running at a locked 30fps. That's pretty impressive considering the scale of the game.

TTL Demag0gue told us about an article at Tied the Leader wherein gunslingers share their thoughts about Destiny's character classes. Go read it!

Breaking Down the Clues

Destiny Updates stopped in to announce an analysis of the Destiny weapon/armor information screens, as shown at E3. Pretty nice rundown - check it out, you may have missed some of this!

DestinyHub breaks down the demo

The folks over at DestinyHub have posted a fantastic scene-by-scene analysis of the E3 demo that points out a lot of interesting details and provides some thought-provoking speculation. It's a lengthy article with a ton of screengrabs; give it a read!

TTL Demag0gue took an overarching look at the Law of the Jungle trailer, and shared his thoughts, written from a storyteller's perspective. Swing by Destiny Guardian to read them! 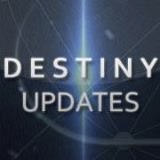 Destiny Updates walked through the Law of the Jungle video a couple of days ago, and touched on pretty much every detail he could find. Go give it a watch - you might see something you missed when you watched the trailer, or you might learn a new interpretation you hadn't considered! Solid piece of work.

Over at DestinyHub, Con took a really, really, REALLY close look at the PS4 announce video - go see what you missed. Screenshot central. Thanks, Hedge.