Kermit let us know about a Time interview with DeeJ, covering Bungie and the launch of House of Wolves, as well as a look into the role of our illustrious Community Manager. Nothing really new for frequenters of the Destiny community, but it's nice to see Destiny getting some coverage from more traditional press.

We already knew that Issue #257 of Edge magazine would have a Destiny cover story, but now we have a better idea of what to expect from the feature:

As kapowaz points out, there's a quick teaser online featuring two paragraph-sized quotes from Joe Staten about what Bungie learned from ten years of making Halo games. Good news for people the like long story arcs! The Edge issue will be available for purchase starting this Thursday. 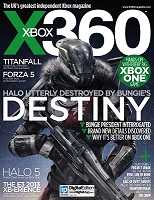 Issue 100 of the independent UK magazine "X360" prominently features Destiny on the cover - complete with an absurdly sensationalist headline! The main article within covers the usual post-E3 details (which won't be new to most DBO readers), but the interview with Harold Ryan provide some interesting quotes, at least. This issue is on sale in both print and digital forms from the X360 website. (As always, please refrain from posting scans of paid material on our forum.)

Remember the minimalist teaser in Edge magazine that electricpirate and kapowaz noticed a couple weeks ago? Looks like they were right about the hints pointing to Destiny - kapowaz has spotted a (tiny) preview image of the upcoming issue's cover. Subscribers will get to read the full story on August 1st, so don't go pillaging your local newstand just yet!

So a Warlock and a Titan Walk Into a Bar...

Bungie has put up their E3 Day 3 recap video. Go and check out SPACE MAGIC!

Lightning in a Bottle

Eric Osborne talked to MCV recently - you can read a small excerpt in this promo piece, or you can grab a digital copy (for £1.99) from their website. And you can also read an article written by the brother of a Bungie fan - one that uses Destiny as an example to help to explain why sites like this one exist. Great stuff!

A deep summary from PSM

Playstation Magazine UK has written up their first look at Destiny. According to urk, the info they're disseminating has all been public since February 17... but if you read it carefully, it might seem new. (I was at the mid-February press conference, and some of it seems new.) Worth a look, just for its overview properties! Thanks, Mr Daax.
TAGS: playstation, mag, summary
Claude Errera | May 18, 2013 12:27 pm | link

Staten Has the Gift of Gab

Xenos noticed yet another new interview with Joseph Staten over on x360magazine.com. Man, that guy's been busy! Some great talk about Bungie's approach to developing and defining Destiny, persistence and customization of your Guardian, storytelling, and a few other tidbits. Go give it a read, then sound-off in the forum!

Game Informer Gets the Scoop

DeeJ let the Bungie.net populace know that the latest issue of Game Informer is out and contains an article on Destiny:

The contents of their write-up feature some insights on our vision for Destiny, the way we work, the music you'll hear when you play, the enemies you'll fight to reclaim our lost civilizations, as well as some never-before-seen glimpses of our brave new world.

The print version should be available on newsstands within a few days, but subscribers can already access the digital version here. (As a quick reminder, scans/screengrabs of paywalled content are NOT allowed on our forum.)