While we're playing catch-up, we should point out that Ragashingo has been quite busy over the past month and a half or so, focusing primarily on the origins of the Awoken. (The earliest episode we didn't mention here was Episode 36, which focused on The Fallen Houses... but everything since then has been pulled from The Book of Marasenna, which tells the story of Mara Sov, and her origins.) Here are some links to his forum posts, but remember; these are all archived in our Bite-Sized Backstory Archive (here's a direct link to all of the recent posts). 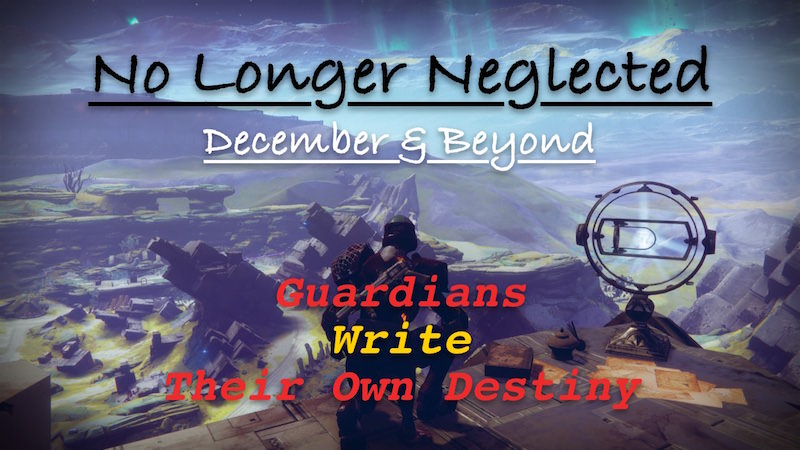 Ragashingo has posted another installment of his Bite-sized Backstory series - this one focuses on little-known facts about the Fallen. (Check out the video that bluerunner found for some details you might not have noticed for yourself, these past 3 years...) We've added this latest article to the BSB Archives here at DBO.

Ragashingo is back with a new Bite-sized Backstory installment - this one introduces us to the Fallen. You've fought them for years - now see how much you actually KNOW about them! Go read the newest chapter in our BSB archives:

You can, of course, also leave him feedback on our forum.

The pattern we've followed to this point with Ragashingo's Bite-Sized Backstory episodes has been to provide a front-page newspost for every three installments. However, with Number 26, Raga has come to the end of Oryx's story, so we're posting just the two most recent:

These are also both available in our BSB Archive, if you'd rather read them there. While he's finished Oryx's story, he's not done with his series; next up is the Fallen! Keep your eyes peeled.

Ragashingo's posted another three installments of his 'Bite-Sized Backstory'; follow along as Oryx punishes one offspring and receives gifts from another, fights with a Vex mind, and discovers a long-sought prize.

We've finally set up a local place to read these; if you're starting from scratch, just visit the Bite-sized Backstory page itself, but if you'd just like to read these latest three, in order, you can do that at this link.

Ragashingo's posted another three installments of his 'Bite-Sized Backstory'; follow along as Oryx dreams, is betrayed by his sisters, has children, and discovers the Vex! Good stuff in here.

Well, we hope your end-of-year celebrations were epic. (And we hope they're not the last ones ever, but that's another story.) Ragashingo finished up another three installments of his 'Bite-Sized Backstory' series, and we're here to bring them to you. These focus on the more recent conquests of Oryx - and maybe some tie-ins with previous Bungie games. Go give 'em a read!

Three more chapters in Ragashingo's Bite-Sized Backstory series have been posted, so it's time to remind you about them again. The battle is joined; Oryx (Auryx/Aurash) and his sisters take on the Ecumene. What does this all mean? Go read 'em!

When Ragashingo started posting his 'Bite-sized Backstory' essays, I promised to keep you informed as new ones came out. I've been lax. (To be fair, I was out of state - and mostly off the internet - when 7, 8, and 9 came out... but still.) If you haven't read any of these, you should start at the beginning: Raga's been telling the backstory of Destiny in a way that the average person, who might not have time to go through ALL the Grimoire cards (and figure out their order), can understand. He's also been doing a nice job of keeping track of updates himself, so once you start reading them on our forum, you can easily step through to the end. However, I'm STILL going to link to the last 6 he's posted... because I want all of the pieces linked in our database as well.

Catch up, read 'em all... they're fantastic!

A couple of weeks ago, we mentioned Ragashingo's Bite-sized Backstory series, a novel approach to the Destiny Grimoire. There was a promise of periodic reminders, as the series continued. Looks like the period is 3 episodes, because last night he posted Episode 6, and today we're gathering the new ones. Again - this is a way of understanding the backstory of Destiny, as presented in the Grimoire cards, without trying to figure out the proper order, and sometimes without having to interpret. A fantastic reference!

Try 'em out - and keep coming back, it's a fascinating story!

Bite-sized Backstory - Grimoire for those with less time

Ragashingo is doing his best to make the backstory of Destiny, as presented in the Grimoire cards, more accessible to the rest of us. A few days ago, he started a series on our forum called 'Bite-sized Backstory' - and it contains easily-digestible chunks of the Destiny universe, with sources (if you want to check up on his facts). Fantastic reading! So far, there are 3 segments:

Give these a read, then check back for updates! (We'll remind you periodically.)